To Brie, Or Not To Brie: Food Aversions In Sobriety

Two years ago, I could’ve easily dined on a wheel of Brie like it was a cookie and washed it down with a glass or two of Malbec. In fact, I did. More than once. I’m sure of it. 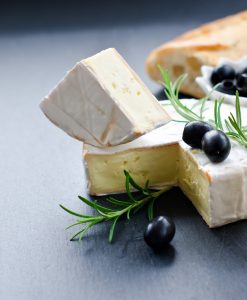 I loved Brie. Alone. On crackers. Paired with French bread. Baked in a puff pastry with cranberry chutney or apricot jam and almonds. But, never without a glass of wine. Or perhaps a really good beer.

Until last night, I hadn’t thought much about it. Earlier this week, Brie was on sale at our local grocery store and I bought some, thinking I’d snack on it with my favorite pita crackers. Turns out, I accidentally stress ate the crackers right out of the box in the office on Monday. I may even have set a speed eating record.

Crackers gone, the cheese stood alone. What to do?

First, I used some Brie to dress up a hamburger and fresh tomatoes. It was alright. But, the melted Brie overpowered the burger. In a really big way.

My second attempt with the Brie was last night. I was wrapping up a late conference call, and fading fast. I texted my husband in the other room and asked if he’d make me a little bit of dinner (he and the kids had eaten earlier – we had been in divide and conquer mode with both kids on lacrosse fields for games in two towns nowhere near each other – and somehow I’d forgotten to fuel myself). The fabulous man he is, he obliged and whipped up scrambled eggs with Brie and avocado and a mini bagel. Delish, I thought. Until I tasted it. Again, the Brie made me turn up my nose. Blech, I almost said out loud.

It wasn’t my husband’s cooking. It was the Brie. I just didn’t like it. And, then it hit me. I always used to drink wine when I ate Brie. Immediately, I took to Twitter:

What is best paired with Brie in sobriety? Just realized I do not like it without wine. Not one bit. #sobergirlproblems

One follower replied. Her, too, she said. Hmm. I wondered. What other food aversions will I discover. I’ve been sober almost 15 months and so far this is the only one.

I’ve had plenty of cravings. In fact, when I order the nice, big, loaded bison burger and sweet potato fries on the menu at one of my favorite local restaurants, it is truly agonizing not to also order a beer.

I don’t have too many food aversions in general. When I was pregnant, I couldn’t stand the smell of dog food. And, since pregnancy, I’ve been unable to tolerate the smell of tuna in a can. Other than that, I can’t think of any food that truly turns me off. I am curious to know what experiences others have had with food aversions in sobriety – please share a comment.