Love Affair or Addiction: Why I Can’t Stop Running

My love affair with running began almost five years ago. And, it has been the most tumultuous, ridiculously emotional roller coaster I’ve ever ridden. 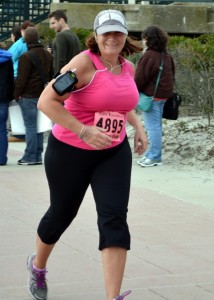 It was June 2011, the first day of summer camp for the kiddos. I had decided it was time to lose the sloth and do right by myself. Declaring it “The Summer of Laura,” I set out to become a runner.

But, of course, we all have to walk before we run. And, I found I couldn’t even run half a mile without feeling like I was going to collapse. Luckily, I’m an all or nothing kind of gal. And, when I set out to accomplish something, failure is typically not an option. I stuck with it, and by August I was contemplating a half marathon scheduled for September.

I didn’t even register for the half. I actually got sick. I awoke out of a dead sleep one night with heart attack symptoms and we raced to the ER. It wasn’t a heart attack. We still don’t know what it was. Anxiety? Maybe? The symptoms came and went for months and I alleviated them with medication that warned against exercising and raising my heart rate. Alcohol also helped the symptoms. A lot.

So, I slacked off all winter and, when spring arrived, I decided to try running again. I was back at ground zero but remembered how much I had loved running a year prior and how quickly I had built up my stamina. It was like riding a bike, and soon I was planning everything around going for runs.

I registered for a half marathon, spent the summer building up my distance and, on vacation in the town where the race was to be held in October, ran parts of the course daily, sending my family to the beach via car in the morning and running to meet them there.

Then my left knee started to bother me and I didn’t run at all in August – I tried a couple of times only to feel the pain in my knee and stop. When the kids went back to school, I decided to hit the pavement – if I didn’t get back into it, I would never be ready for the race. I was cutting it ridiculously close as it was, having never run more than six miles up until then.

My knee felt fine and I went for it. I had five weeks. I ran three times over the course of the next two weeks – three miles each time, and then pumped out eight miles for the very first time a whopping three weeks before the half marathon. My long run the following week was 10.5 miles. I waited two days and ran five miles. I waited another two days and ran five miles again. Three days later, I set out for another 10.5. By the way, for those non-runners reading this, my approach didn’t follow anyone’s recommended half marathon training plan. It was stupid. But, I was owning it and I was going to run that race.

I achieved my goal. But, I also burned myself out training the way I did. I didn’t run again for three weeks. After that, I waited a month. And, then I waited three months, putting in a few miles to prepare for a local 5K, the Sandy Hook Run for the Families, on March 23, 2013.

I loved running the half marathon so much that I decided to train for and run it again in 2013. Summer started and so did my running. The more I ran, the more I loved it. My running was for me and no one else. It was the only time I ever came up for air in a healthy way, the only time I wasn’t multitasking. It forced me to manage my time better so I could plan my runs. The calories I burned made room for more alcohol. Beer was always great fuel the night before a long run.

Then, in September, I had to have a molar removed, the result of a root canal gone bad. At least they let me dope myself up with Valium for the surgery – before and after. But, mouth pain is the worst pain I have ever experienced – seriously, it rivals my back pain, and I would rather give birth – and the bone graft and wound did not heal as quickly as the dentist had promised. I was unable to complete training and run the race.

Perhaps the tooth surgery was a blessing in disguise. Had I kept running, well, who knows. By the end of 2013, my back was beginning to fail me – after 12 years, I shouldn’t have been surprised. A car accident in 2001 ruptured a disc, surgery the following year (after months of physical therapy and steroid injections) had failed, relaxin was pure Heaven but only present during pregnancy (fortunately, I had two), and chiropractic care had postponed the inevitable longer than anticipated. It was time for fusion. But not before proving medical necessity to the insurance company.

By February 2014, I was a mess – I could no longer sleep in a bed because I couldn’t get out of a lying down position, and the days when I couldn’t stand upright or even put one foot in front of the other became more frequent. An MRI showed two vertebrae, bone one bone, no disc.

Long story short (or not), I spent the next eight months in physical therapy and receiving steroid injections. I walked when I could – July was a good month, but we’re talking a 20-minute mile on a good day. In September, I went for my final injection – I barely made it into the procedure room on my own. I looked at my doctor, with tears rolling down my face and said, “Please. I can’t do this anymore. No more band-aids. Fix this.” On November 10, 2014, I had spinal fusion surgery. And I got my life back.

On March 25, 2015, I graduated from physical therapy, officially recovered from surgery in less than six months. No restrictions. Except for running, but I truly believed that conversation wasn’t over – there had to be a way, someday, to run again. I walked out the door with instructions to start walking, quicken my pace, increase my distance, and continue working to strengthen my core and upper body.

I tried not to think about not running. I tried to focus on walking. I lasted six weeks before I attempted my first half mile at the end of a walk. I was terrified, but the desire to try buried the fear. It was amazing. No pain. I waited four days and tried it again. One June 3, 2015, I ran two miles. Four days later, I did it again.

With my walking pace gaining on my old slow running pace, I began to obsess about speed. I added running to the mix to reduce the amount of time it took to go longer distances. The more I ran, the more I wanted to run.

My addictive personality further fuels my desire to run. Running is like a drug. It’s a fix. I need it. I want it. I can’t give it up. Not completely. Once I start I can’t stop. It doesn’t hurt. It feels great when I am doing it, and that just makes me want more. In fact, I dictated the idea for this blog post into my phone while running this afternoon. True story. Wanting to finish strong in the final days of a Winter Warrior Challenge (walk or run at least one mile outdoors every day for the month of January), I set out to walk six miles and ended up running mile two and mile five. It felt incredible.

I love running. But, I know, ultimately it will not love me in return. I know I am a fool to spend too much time with running. In the end, running will probably hurt me. I will let myself run a mile or two a few times a month, usually during a long walk. But, I feel like a better runner now than I ever was before. My pace is good. It’s easy. And, I always want more.

Like alcohol, too much running will hurt me. Yet, I fight to keep it in my life.

Unlike alcohol, running keeps getting the best of me. I give in and taste a drop here, gulp a mouthful there. Just enough to remind me how lucky I am to still have it, how good it is, how much I love it. I mostly trust myself, but I am afraid of going overboard.

As I finished mile six this afternoon, Dyslexic Heart by Paul Westerberg came up in my playlist.

Do I read you correctly, I need you directly

Now, help me with this part

I got a dyslexic heart?

How apropos. That pretty much sums it up. Here’s hoping I don’t have to hit rock bottom with this addiction, too.